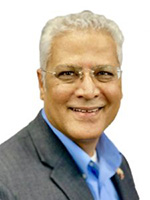 Dr. Ramana Kuchibhatla received a B.Sc. (Hons) in Mathematics and a M.Sc. in Applied Statistics from the Osmania University in Hyderabad, India. He worked at ICMR’s Institute for Research in Medical Statistics in Madras in public health and health statistics before joining the Administrative Staff College of India in Hyderabad as a Faculty Member in the Center for Energy, Environment & Technology.

His pharmaceutical career spans nearly 20 years starting with Glaxo Wellcome (now GlaxoSmithKline) where he consulted in Biostatistics and later in Clinical Research and Development in the Neurology & Psychiatry therapeutic area. During his tenure, he was involved in the successful filing of two sNDAs that brought Zyban® and Lamictal® (pediatric indication) to market.

In 2001, he joined Targacept, Inc. as Sr. Director of Clinical Research and Development to help setup Clinical Development, Biostatistics and Data Management functions at Targacept Inc. Dr. Kuchibhatla helped file several INDs for various neuropsychiatric indications as well as bring several NCEs into clinical development with trials conducted in North America, UK, Eastern Europe, and India. He was closely involved in several successful in-licensing and out-licensing deals at Targacept and played a critical role in their successful IPO in June 2006.

In April 2007, Dr. Kuchibhatla left Targacept and founded QED Pharmaceutical Services with offices in North Carolina, USA and in Hyderabad, India to offer integrated clinical research consulting services to the pharmaceutical companies. He helped several companies plan and implement clinical development and regulatory activities in USA, Europe (both Eastern and western), and India over the past 9 years.

During this crisis Melior Discovery continues to operate as usual.  Our company has been deemed a critical business, exempt from operational restrictions imposed by the state of Pennsylvania.  We carry on with our research studies including those in pulmonary inflammation, pulmonary edema, and pulmonary fibrosis research. We are taking all necessary measures to ensure that we maintain a safe work environment.  This website will be promptly updated if our status changes.