Advanced age is associated with a sequelae of health conditions with tremendous economic burden. However, our progress towards understanding the molecular underpinnings of the aging process has accelerated over the last several years raising the prospects for developing anti-aging therapeutics.

Melior recognizes the importance of this burgeoning field and have incorporated an array of models in aged mice geared towards aging studies.   Cognitive and memory decline associated with aging with clinical indications that include Mild Cognitive Impairment (MCI), Major Neurocognitive Disorder (NCD), Alzheimer’s disease (AD), and others represents a major component of the entire spectrum of age-related disease and an area of significant unmet medical need.  In the preclinical setting of aging studies, we have validated a host of aging mouse models including learning and memory paradigms to assess cognitive flexibility in aged mice compared to young mice and the impact of test articles in this setting.

The study outlined below shows one example of an aging mouse model of memory.  Older mice (21 months of age) had poorer memory retention of a learned conditioned stimulus that had been paired with an unconditioned stimulus. This classical conditioning model described involves pairing a context and/or cue (conditioning stimuli, CS) to a shock (unconditioned stimulus, US) and later measuring the ‘fear’ response to the CS in the absence of the US. In this case, a defensive freezing or immobility response serves as a reliable measure of fear. 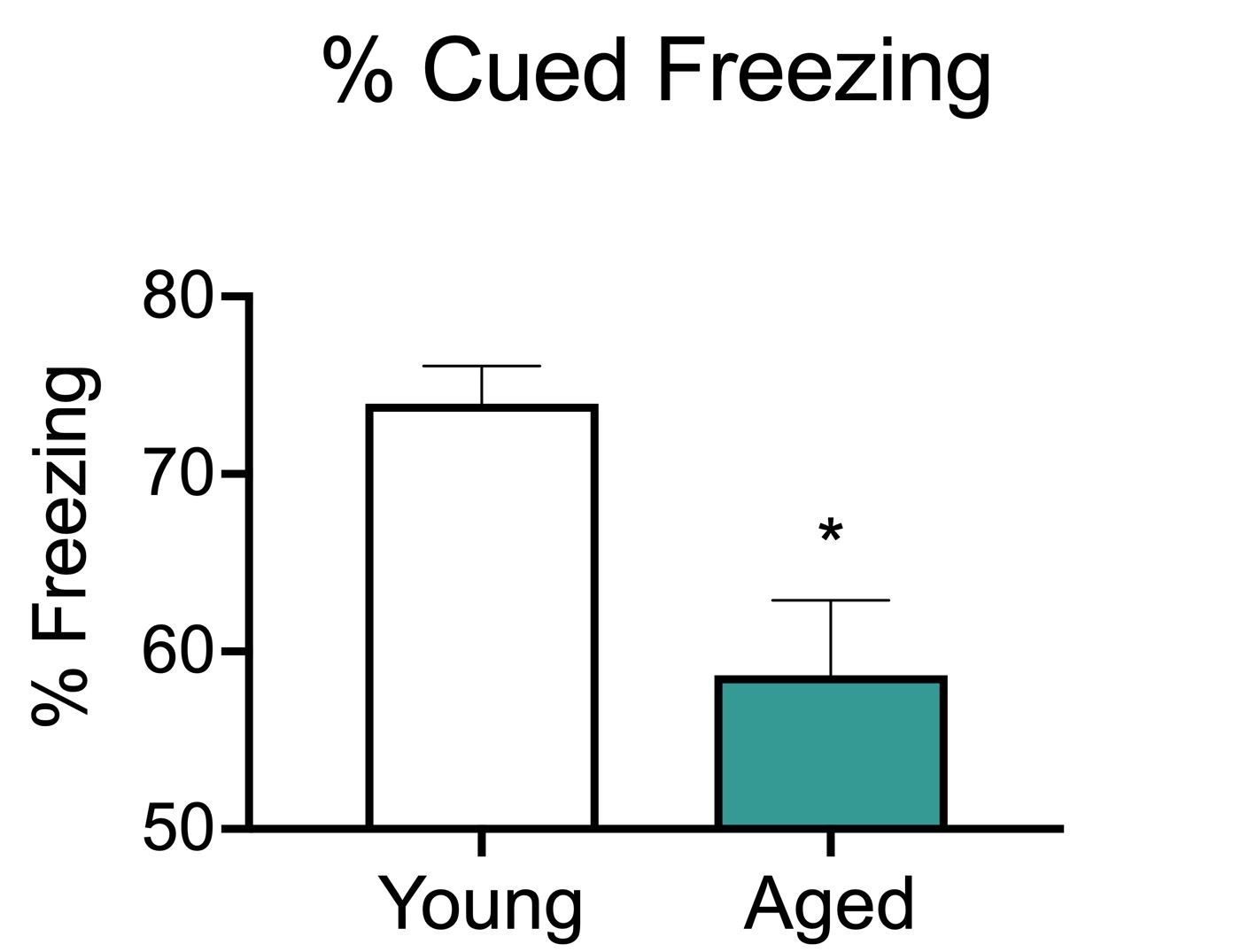 Aging Model Involving Learning and Memory Evaluation.  Aged (21-month-old) and young (12-week-old) male C57Bl/6 mice were trained to associate a conditioned stimulus (an audible tone) with an unconditioned tone (an electric shock).  Freezing behavior was used as a measure of fear response.  The baseline levels of freezing behavior, prior to training was no different between young and old mice (data not shown).  After a 3-day learning routine of 8-minutes per animal / day animals were tested by presentation of the CS without the US.  The aged animals had significantly lower retention of the learned behavior than the young mice.  Data are means ± SEM (N=12 young animals; N=19 aged animals) * p≤0.05.

While advanced age is associated with increased incidence of a wide range of disease states such as cancer, diabetes, auto-immune diseases and neurodegenerative diseases it is also associated with other physiological changes that are considered to be part of normal aging.  For example, reduced motor function is a natural process that effects all individuals at some point after the age of 40.  Using certain motor function parameters as biomarkers for the aging process we can observe that the rate of aging can be widely different among individuals.  Measuring these parameters of motor function in aged mice serves as an aging model suitable to test for therapeutics that are capable of slowing the aging process.

Melior has assembled an array of aging models that serve well to interrogate the physiology of normal aging.  Grip strength is an example of a simple, reproducible, and translatable biomarker of motor function.  The study below illustrates how aged mice (20 months) have clearly reduced grip strength compared to younger mice (10 weeks) 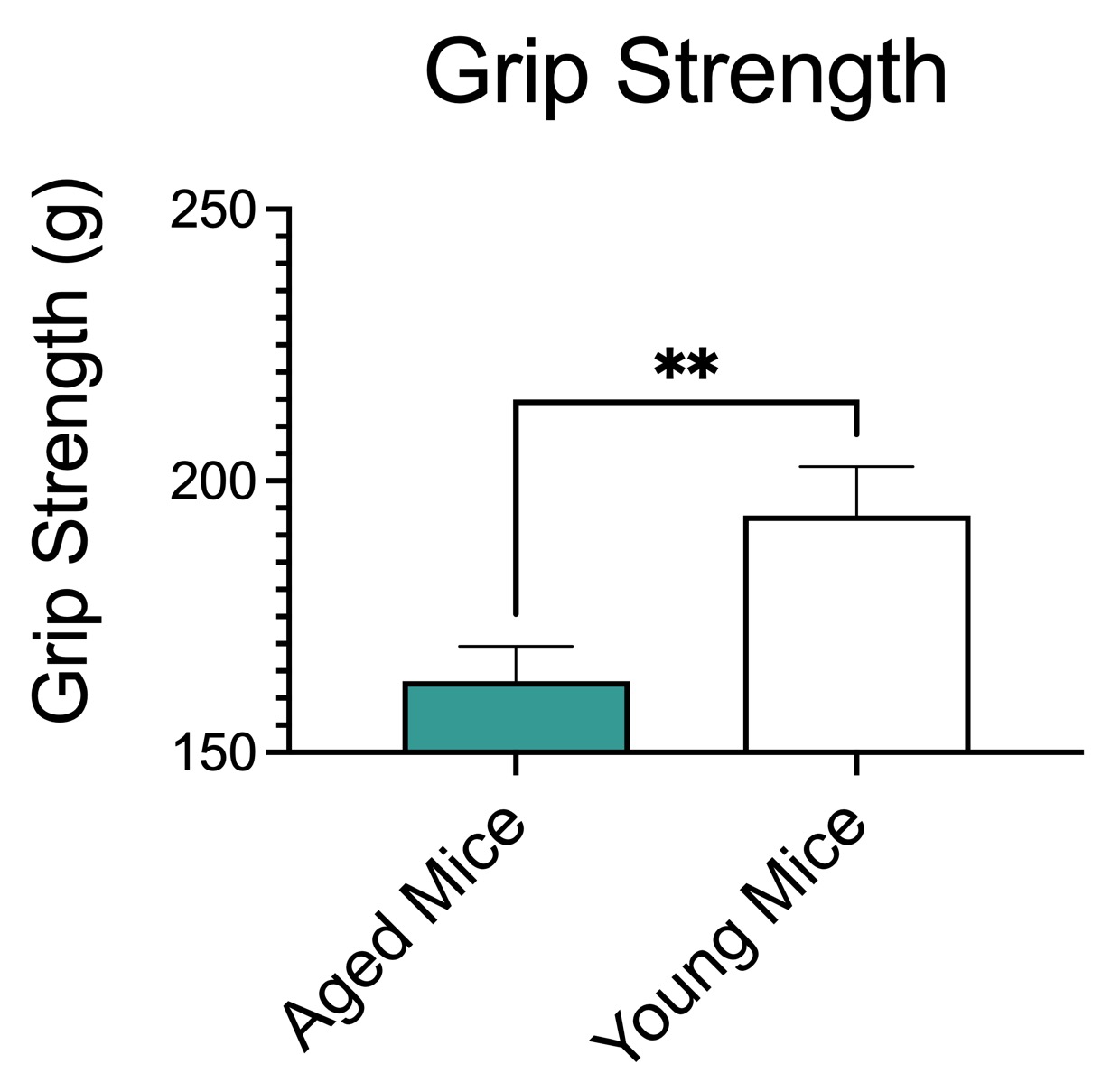 Grip Strength in Aged Mice.  Aged (20 month-old) and young (10 week-old) male C57Bl/6 mice were tested using a Ugo Basile Grip Strength Meter (GSM) to measure forelimb/hind limb grip strength.  Animals were lowered onto the top of the grid so that all four limbs were on the grid.  The mouse was pulled backward steadily by the tail with steadily increasing force until it released its grip.  The GSM recorded the peak force of the trial.  Data are presented as means ± SEM (N=12)

The assessment of grip strength can be conducted in either aged mice or aged rats and the simple nature of the assessment lends itself well to a variety of study designs, numbers of treatment arms, and longitudinal study design.

Interested in conducting an aging study with your therapeutic candidate?

If you are interested in learning more about Melior’s use of aging mouse models, please contact us to start the conversation today!