This bead expulsion model is a method for evaluating a test compounds’ ability to alter colonic propulsive motility.

This model is designed to identify pharmacological agents that produce effects on propulsive motor activity and is an excellent predictor of drugs that may be useful for the therapy of irritable bowel syndrome (IBS) or constipation. This model can be modified to identify antagonists of constipative drugs or diarrhea producing drugs.

In this validation study, colonic propulsion was measured in mice treated with an opioid (MORPH), a well-described compound that reduces colonic motility. 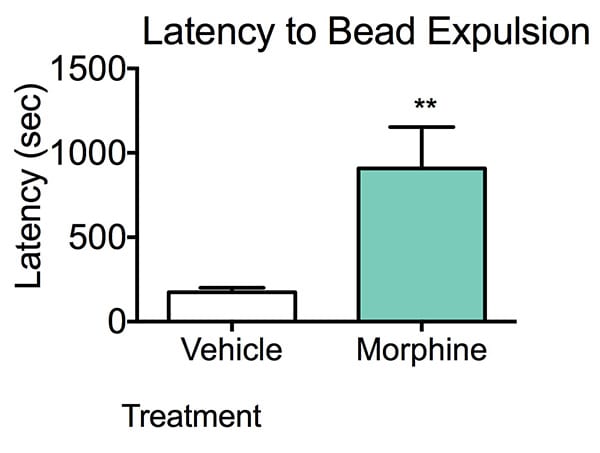 Opioid-treated animals can be used to screen antagonists of opioid-induced constipation, which is problematic in patients with extending treatment duration. This study validates the colonic expulsion assay and demonstrates that MORPH, a well-described inhibitor of colonic propulsion, significantly attenuated propulsive activity.

If you are interested in learning more about the Colonic Motility Model, please contact us to start the conversation today!