The DSS colitis model is induced through administration of dextran sodium sulfate (DSS) in the drinking water of mice. This results in epithelial damage and a robust inflammatory response in the colon lasting several days. Rodents that are treated with DSS develop inflammation of the colon, exhibit diarrhea, rectal bleeding and weight loss. At Melior, we have established a chronic DSS colitis model. 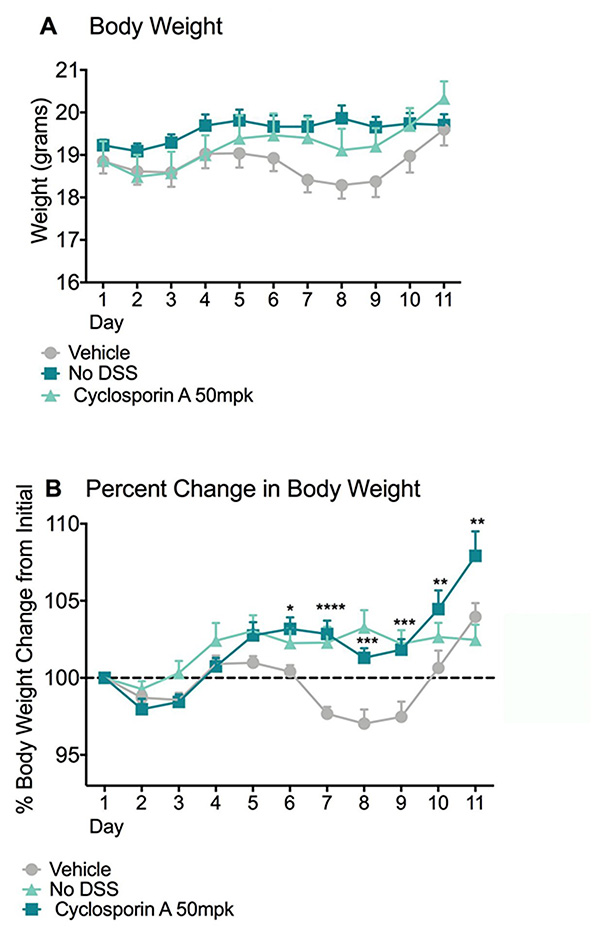 Body Weight and Percent Change in Body Weight. Mice were dosed with vehicle or Cyclosporin A daily for 11 days.  For five days, animals were administered DSS via drinking water. The remaining days animals were provided regular drinking water.  Body weights were measured daily. The Cyclosporin A mice did not display the weight loss observed in vehicle treated mice (Figure A and B).  Data are mean ± SEM and were analyzed using a two-way ANOVA; *p<0.05, **p<0.01, ***p<0.001, ****p<0.0001 compared to vehicle-treated mice.

Colon Length and Weight. Animals were dosed with vehicle or Cyclosporin A for 11 days.  For five days, animals were administered DSS via drinking water.  The remaining days, animals were provided regular drinking water. Colons were removed on day 11 of the study and the length and weights were recorded.  There was no significant difference in colon lengths (C) or weights (not shown) between the groups.. However, the ratio of colon weight / colon length was evaluated there was a significant reduction with DSS treatment  (D). Data are mean ± SEM and were analyzed using One-Way ANOVA; *p<0.05 compared to vehicle.

If you are interested in learning more about the DSS Model of Colitis, please contact us to start the conversation today!