This opioid induced constipation model is a method for evaluating a test compound’s ability to alter colonic propulsive motility. More specifically, this is a model that challenges animals with an opioid to induce constipation.

This model is designed to identify pharmacological agents that can functionally antagonize or relieve the constipation produced by opioids, such as MORPH, as measured by an increase in colonic propulsive activity. This model can be used to identify drugs that directly affect opioid receptors or that functionally affect  opioid induced constipation.

In this study, we tested the ability of Naloxone, a well-known mu-opioid receptor antagonist, on MORPH-induced reductions in colonic propulsive activity (constipation). 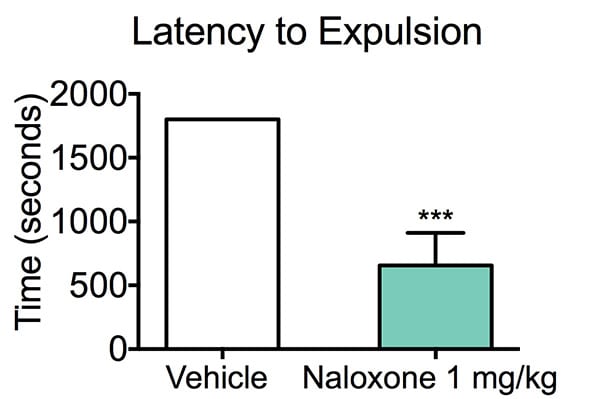 Latency to Expulsion. Mice were treated with either vehicle or Naloxone 30 minutes prior to MORPH challenge.  Mice were then administered MORPH 30 minutes prior to the colonic propulsion study. At peak drug time, a 3 mm glass bead was inserted through the anus into the distal colon.  Mice were observed for the expulsion of the bead and the time noted, with a cutoff of 30 minutes. Naloxone, a well-known mu-opiod receptor antagonist, alleviated the time to colonic propulsion and constipation. Mice treated with vehicle had a significantly increased expulsion time compared to Naloxone-treated mice. Data are mean ±SEM; **p<0.01 compared to control mice (N=8).

If you are interested in learning more about the opioid induced constipation assay, please contact us to start the conversation today!