Examples of non-histamine dependent pruritus-inducing agents include chloroquine, oxazolone, DNFB, imiquimod, and MC903. Each is associated with characteristic differences and work through different mechanisms.

Chloroquine (an anti-malarial) induces a pruritus dermatitis response that is mediated via non-histaminergic mechanisms. Direct injection of chloroquine into the back induces itch and a scratching response in mice. When itching elicits the need to scratch, the tissue gets damaged which initiates the release of inflammatory markers, perpetuating the itch and creating a cycle.

This study validates the anti-itch effects of U-50,488 in a murine chloroquine-induced itch model. 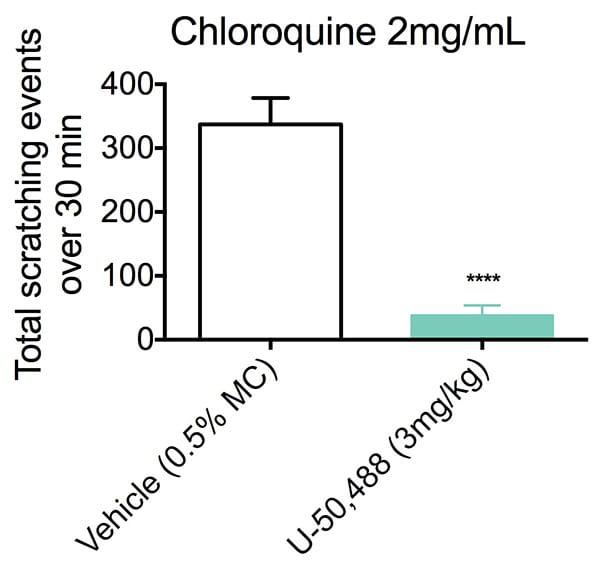 Chloroquine-induced Pruritus Scratching Model. Mice were acclimated to testing chambers 30 minutes prior to testing.  After acclimation, mice were removed from testing chamber and administered Chloroquine into the right shoulder area. For compound testing, U-50,488 was administered 30 minutes prior to Chloroquine.  After administration, mice were returned to testing chamber and recorded for the next 30 minutes. Scratching behavior was monitored and quantified. Scratching events were measured as number of right hindlimb scratches in a 30 minute period at 5 minute intervals. Treatment with U-50,488 significantly reduced scratching events throughout the 30 minute observational period.  Data are mean ± SEM; *p<0.05, **p<0.01, ***p<0.001, ****p<0.0001 compared to vehicle. (N=8)

Depending upon the pruritus-inducing agent used, these studies can range from 1 day to 3 weeks.  While the chloroquine model described above is a one-day model, other agents such as oxazolone, DNFB, imiquimod, and MC903 require 7 days and longer for pruritus to be established.

If you are interested in learning more about the Pruritus Scratching Model, please contact us to start the conversation today!