Status epilepticus (SE) is a form of epileptic seizure that is resistant to treatment with standard anti-epileptic drugs, in particular, benzodiazepines, when they are administered more than 1 h post-onset. Abrogation of the seizures, in that case, is very difficult, requiring days or weeks of treatment, and may ultimately fail.

SE is most often investigated using the lithium-pilocarpine rat model in which pilocarpine is used to initiate the seizures. At Melior we can quantitatively evaluate treatment effects using EEG recording across a wide frequency range (0.3-96 Hz).

We can assess the anti-convulsant activity of diazepam administered intravenously (IV) in a model of status epilepticus (SE) induced by pilocarpine (Morrisett et al., 1987).  Diazepam was administered 0, 15, or 60 minutes after onset of SE and compared to vehicle administered at 0 or 60 minutes post SE onset.

The figure below shows a typical example of an animal before and after initiating SE. The EEG activity is increased across all frequencies by over 10 fold. Treatment with vehicle (A) at the onset of SE has no effect, and seizure activity can continue for several hours. Treatment with 10 mg/kg s.c. diazepam at the onset of SE (B) rapidly blocks seizure activity, returning EEG amplitudes to normal values. 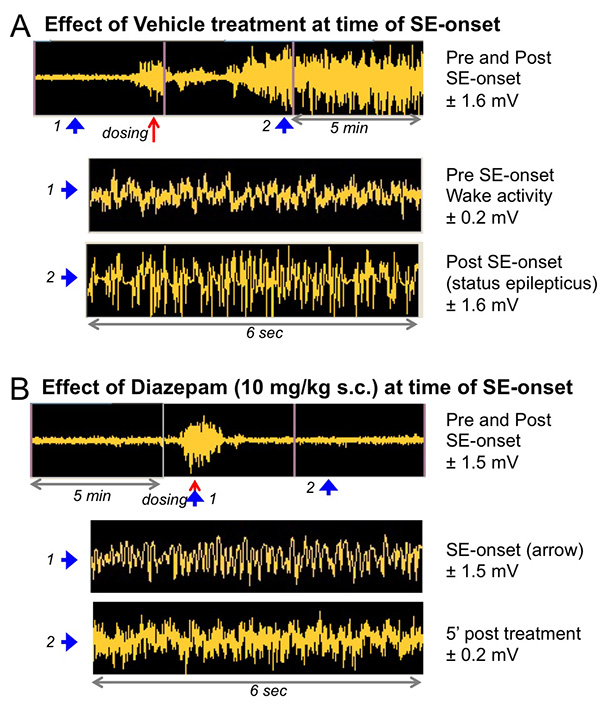 The effects of test drugs (e.g. diazepam) can be evaluated quantitatively by measuring the mean integrated EEG power over various time periods. In the figure below, EEG power from 5 to 10 Hz (A) and from 50 to 70 Hz (B) is shown. Diazepam blocked seizure activity when administered immediately upon SE-onset, showed partial activity at 15’, and no activity at 60 min after SE onset (note different amplitude scales). In practice, test compounds can be administered by s.c., i.p., and i.v. (jugular vein catheter) routes. 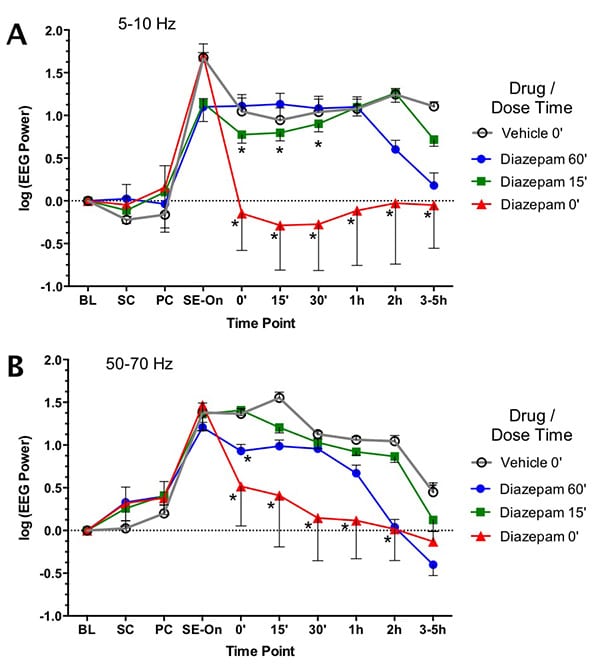 If you are interested in learning more about the Lithium Pilocarpine Status Epilepticus model, please contact us to start the conversation today!