Obesity is a condition of pandemic proportions in the modern world. A myriad of conditions ranging from cardiovascular disease, Type-II diabetes, cancer, and even depression have been linked to obesity.

Research into the mechanisms and treatment of obesity is an ongoing area of interest to many in the pharmaceutical and academic communities. Animal models have proven useful in studying the effects of compounds on diet-induced obesity (DIO).

At Melior we utilize a high-fat diet platform to model a number of acute and chronic features of metabolic and obesity disorders consistent with diet-induced obesity changes in humans. The study illustrated below is an example of how we work with DIO mice. 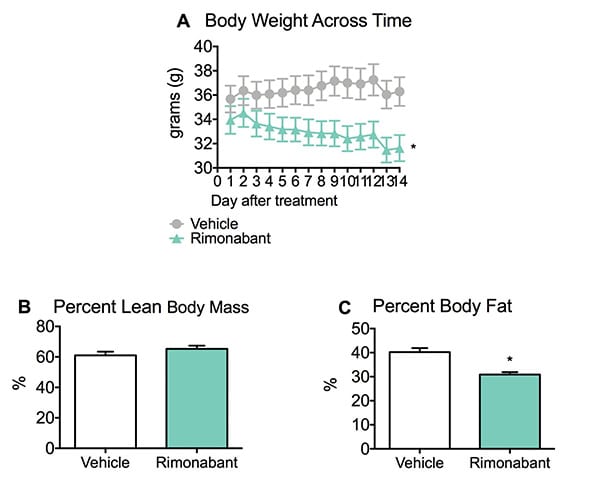 Measurements in DIO mice.  While on a standardized high fat diet, vehicle treated animals gained significantly more weight than animals treated with rimonabant (an anti-obesity drug) (graph A). On day 11 DIO mice were given a dual-energy x-ray absorptiometry (DEXA) scan to determine the percentage of lean body mass versus body fat that made up the weight gained over time. Graph B illustrates that both vehicle and rimonabant treated animals had identical proportions of lean body mass while vehicle treated DIO mice had a significantly higher proportion of body fat (graph C). Data are mean ± SEM, *p<0.5 compared to vehicle. (N=8/group).

Together these data indicate over time, on a high-fat diet, animals gain bodyweight, primarily fat, and these effects can be attenuated by treatment with rimonabant.

DIO studies can be performed in mice or rats. They are typically about 8 weeks in duration and involve group sizes of about 8-12 animals. In addition to DEXA and bodyweight, other endpoints that are included in the DIO model studies include glycemic control parameters such as fasting plasma glucose (FPG), oral glucose tolerance test (OGTT), and/or insulin tolerance test (ITT).

If you are interested in learning more about the Diet-Induced Obesity model, please contact us to start the conversation today!