Type I diabetes is a condition characterized by loss of insulin-producing β-cells of the islets of Langerhans in the pancreas leading to a deficiency in insulin production and secretion as a result of autoimmune attack. This decrease in insulin leads to decreased cellular glucose utilization and elevated blood glucose levels.

This is distinct from Type II diabetes where the primary etiology is related to insulin resistance in metabolic tissues such as muscle, liver, fat, and pancreas.

Streptozotocin (STZ) is a naturally-occurring small molecule (MW=265) that is specifically toxic to pancreatic β-cells. STZ-treated rats or mice represent an induced diabetes model, which is especially useful for studying agents that treat Type I diabetes such as insulin replacement or adjunctive therapies.  In addition,  this model is also well-accepted for studying diabetic complications including diabetic neuropathy, nephropathy, and wound healing etc. 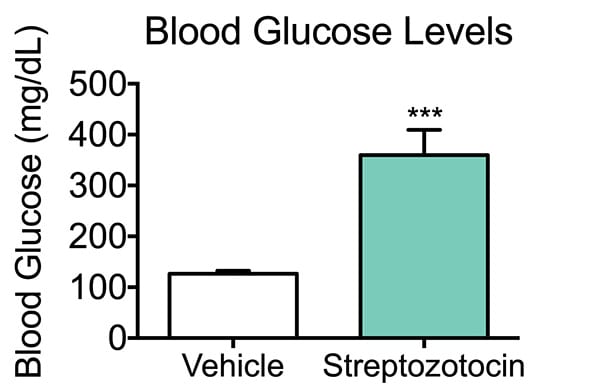 The data above displays the development of neuropathies in an STZ induced diabetes model.
Baseline data was collected for Hargreaves paw withdraw to thermal stimulation and von Frey mechanical thresholds prior to the establishment of a diabetic condition. Latencies to withdraw paws from thermal stimulation are significantly reduced up to four weeks after STZ injection (A). Rats display a trend in reduced mechanical pain thresholds up to four weeks after STZ injection (B), with significant reductions 1-3 weeks after injection. Data are mean ± SEM; *p<0.05, **p<0.01, ***p<0.001 compared to baseline (N=8-9).

The STZ induced diabetes rat model, if used to evaluate diabetic neuropathy, is a chronic model that typically is performed over a period of from 2-25 weeks. Ideal groups sizes are typically 10-12 animals.

Interested in running a Type I Diabetes Model study?

If you are interested in learning more about the STZ induced diabetes model, please contact us to start the conversation today!