Novel object recognition (NOR) is one of the most commonly used tests of memory and cognition used in rodents. This model is a classic cognitive test used to determine the ability of a compound to increase or impair learning and memory.
This procedure is based on the natural tendency of rodents to investigate a novel object instead of a familiar one. The choice to explore the novel object reflects the use of learning and recognition memory. An animal is presented with two identical objects during the first session, and then one of the two objects is replaced by a new object during a second session. The amount of time taken to explore the new object provides an index of recognition memory for the familiar object.

Contrary to most classically-used learning and memory paradigms which require long periods of animal training, the object recognition test offers the ability to obtain rapid information on the cognitive impact of a new drug.

The model has been validated with a range of drug classes that are both pro-cognitive (e.g. D-Serine), and those that impair cognition (e.g NMDA antagonists (MK-801) and muscarinic antagonists (scopolamine).

The study summarized below illustrates both memory impairment as with a muscarinic antagonist (scopolamine) and memory enhancement as with D-serine. 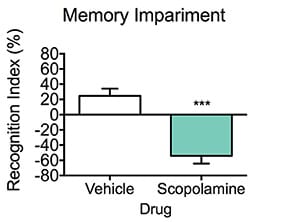 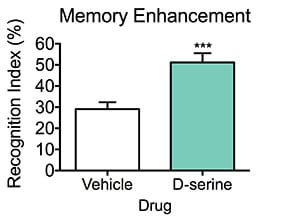 NOR mouse data illustrate a memory impairment induced with the muscarinic antagonist scopolamine and a memory enhancement with D-serine, an amino acid shown to have cognitive enhancement potential.
Data are mean ± SEM; ***p<0.001 compared to vehicle (N=13-15). The Novel Object Recognition Test is conducted in both mice and rats. Ideal groups sizes are >12 animals.

If you are interested in learning more about the Novel Object Recognition test, please contact us to start the conversation today!