Social recognition is an animal model of short-term memory. This model is based on the fact that when adult rats are exposed to juvenile rats, the adults spontaneously investigate the juveniles. The duration of that investigation is a function of the degree of familiarity between the animals.

In the study summarized below, we assessed the memory differences between two inter-trial intervals (ITI), the cognitive effects of Armodafinil on short-term memory, and the interaction of adults given Armodafinil and exposed to novel juveniles. 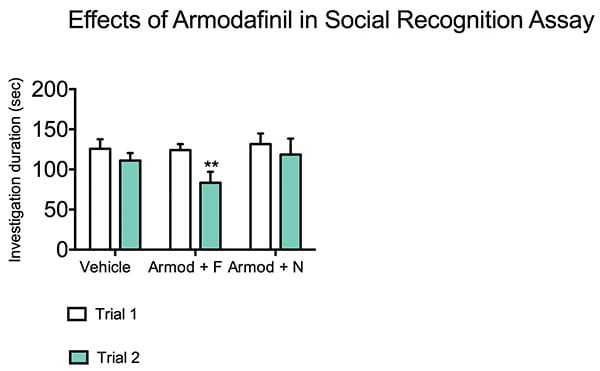 Effects of Armodafinil in Social Recognition Test. Adult male rats were placed individually into clean rat cages containing only a microisolator lid and acclimated for 30 minutes. After the acclimation period, a juvenile conspecific was placed in the cage and the amount of time that the adult spent investigating the juvenile was recorded over a five minute period (Trial 1).

Investigative behavior included sniffing, close following, grooming and fighting (aggression). After five minutes, both rats were returned to their home cages. The adult rat was then dosed with vehicle or Armodafinil 90 minutes after the first exposure, replaced into the test cage and reacclimated for 30 minutes before the start of Trial 2.

During Trial 2, either the same juvenile (F – familiar) or another novel juvenile (N – novel) was placed in the test cage and social investigation was recorded. After a two hour inter-exposure interval (IEI), untreated rats do not retain the memory of the juvenile.

If you are interested in learning more about the Social Recognition test, please contact us to start the conversation today!