Anxiety is a psychological and physiological state characterized by cognitive, somatic, emotional, and behavioral components.

In the Light Dark Test, a rodent is placed in a chamber with the option to explore a brightly lit area or darkened area. By quantifying the amount of time in each compartment, we can monitor exploratory as well as anxiogenic or anxiolytic behavior.

The Light Dark Test serves as an alternative and complementary model to the Elevated Plus Maze Model as an animal model of anxiety.  Unlike some other behavioral models used to assess anxiety responses that rely upon the presentation of noxious stimuli (e.g. electric shock) these two models rely on rodents’ natural proclivity towards dark, enclosed spaces and fear of heights and open spaces 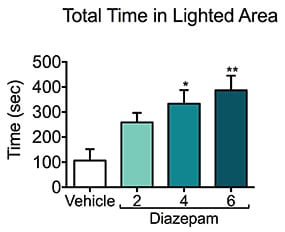 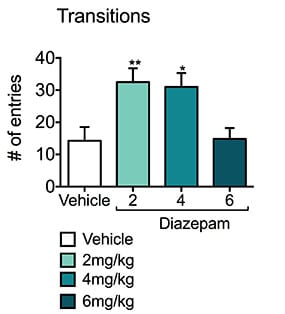 Validation of the Light Dark Test as a Model of Anxiety.  The above graph depicts a dose dependent increase in the amount of time spent in the light area following the administration of diazepam, a potent anxiolytic. The increased time spent in the light area is indicative of decreased anxiety. Treatment with diazepam increases the number of transitions between light and dark areas in animals treated with 2mg and 4mg diazepam. CD-1 mice treated with 6mg diazepam had a similar number of transitions compared to vehicle-treated animals. Data are mean ± SEM; *p<0.05, **p<0.01 compared to vehicle (N=7-8).

The Light – Dark Transition Model can be run in either mice or rats. It is most typically run in “acute mode” meaning as a one day study to evaluate the effects of a compound after a single administration.

If you are interested in learning more about the Light Dark Test, please contact us to start the conversation today!