The fear conditioning learning and memory model is a method for evaluating trial compounds ability to reverse a drug-induced deficit in memory.

Fear conditioning involves pairing a context and/or cue (conditioning stimuli, CS) to a shock (unconditioned stimulus, US) and later measuring the ‘fear’ response to the CS in the absence of the US. A defensive freezing or immobility response serves as a reliable measure of fear.

The study summarized below was designed to establish a dose of MK-801 (an NMDA receptor antagonist) that blocks contextual conditioning but not cued conditioning. Rolipram (a PDE4 inhibitor) restores the deficit created by MK-801. 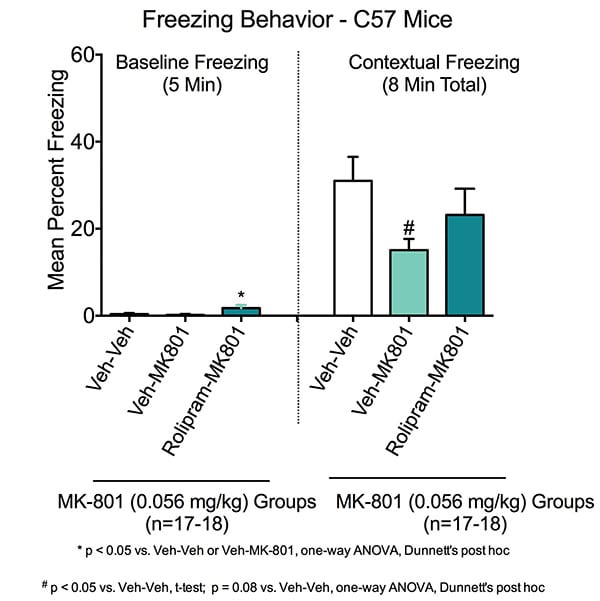 Contextual Learning in the Fear Conditioning Test. During the baseline training session on Day 1, there was minimal freezing across all groups (i.e. animals placed in chamber and received no shocks). Animals treated with rolipram had a small increase in baseline freezing.

Contextual freezing was measured on Day 2. Animals were trained in the established context of the chambers but no cued auditory tone. Animals were then placed in the chambers for 8 minutes with no shocks and freezing measured. Veh-Veh treated animals exhibited a marked increase in freezing behavior following fear conditioning training, indicating normal conditioning to the chamber context. When the entire 8-minute test period is considered, MK-801 caused impairment of contextual memory, such that Veh-MK801 animals had significantly reduced contextual freezing compared to Veh-Veh treated animals(#p<0.05) . This deficit was restored with rolipram in the Rolipram-MK801 animals. 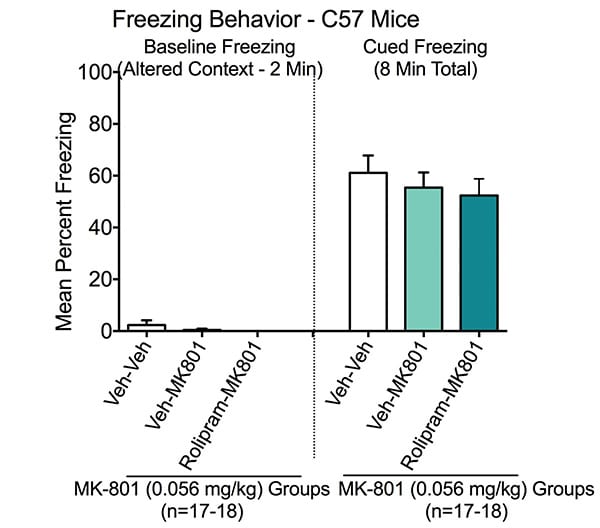 Cued Learning in the Fear Conditioning Test. Cued freezing was measured on Day 3. Baseline was first assessed in chambers in which the contextual features were modified from those used to train for contextual learning. There was minimal freezing across all groups (i.e. animals placed in modified chamber and received no shocks).
Animals were trained in the same chambers with a cued auditory tone. Veh-Veh treated animals exhibited a marked increase in freezing behavior in the presence of the auditory tone, indicating normal conditioning to the auditory cue. When the entire 8-minute test period is considered, neither MK-801 nor Rolipram imparied cued memory, which is consistent with internal validation studies.

If you are interested in learning more about the Fear Conditioning model, please contact us to start the conversation today!