There are a number of animal models of depression that are used to identify pharmacological agents that have clinical potential as antidepressant agents.   The two most commonly used models are the Forced Swim Test Model and the Tail Suspension Test Model.

The forced swim test is a commonly used model for detecting anti-depressant activity of pharmacological agents.

When mice are required to swim in a container with no route of escape, they develop a behavioral despair that is characterized by immobility except for small movements needed to remain afloat. This immobility is thought to reflect a state of lowered ‘mood’ (i.e. depression) in which animals have given up “hope” of escaping.

Forced swim is attenuated by a variety of clinically active antidepressants. Antidepressants increase the amount of struggle and the latency until the first extended immobility. This assay is considered to be a good predictor for antidepressant activity and identifies nearly all antidepressant classes including tricyclics, SSRIs, 5-HT1A receptor agonists, and MAOIs. 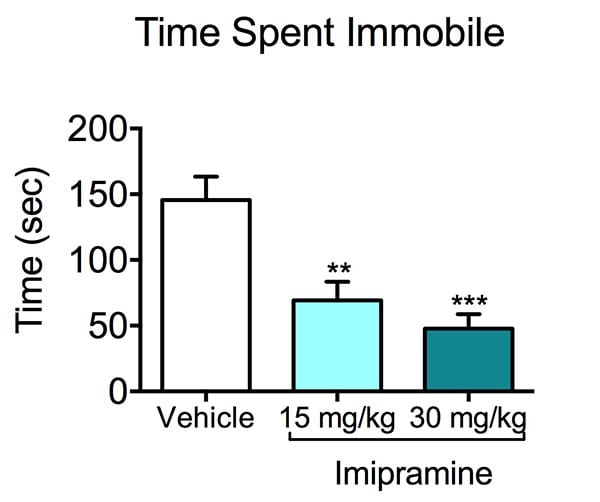 The data above illustrate the effects of imipramine (Tofranil®), a tryicyclic antidepressant, in the forced swim test with mice. Imipramine dose-dependently decreased the time spent immobile relative to vehicle treated animals. The decrease in immobility has been found to be predictive of antidepressant effects in the clinic. Data are mean ± SEM; **p<0.01, ***p<0.001 compared to vehicle. (N=6).

The Forced Swim Test is typically run in an acute mode (study completed in one day) by evaluating test articles after a single administration. Ideal group sizes for most studies is about 12 animals. It can be performed in both mice and rats. Since it is non-invasive it can be easily incorporated several times over the course of a chronic study.

If you are interested in learning more about the Forced Swim Test, please contact us to start the conversation today!