The chronic mild stress (CMS) model is a paradigm developed in animals to model the relatively minor and unanticipated irritants that lead to a state of anhedonia (an inability to experience pleasure) in some individuals.

Melior Discovery has developed a chronic mild stress paradigm that leads to increased behavioral depression and elevated corticosterone levels in rodents. Other parameters that can be evaluated in the CMS model include Coat Assessment, Hyperthermia, Sucrose Intake, and behavior modification such as seen in the Tail Suspension Test. In all instances, these changes are attenuated by treatment with an antidepressant.

There are a number of animal models of depression that are used to identify pharmacological agents that have clinical potential as antidepressant agents. The two most commonly used models are the Forced Swim Test Model and the Tail Suspension Test Model

Mice, suspended by the tail, will rapidly develop behavioral despair that is characterized by immobility. This immobility is thought to reflect a state of lowered ‘mood’ (i.e. depression) in which animals have given up hope of escaping.

Tail-suspension immobility is attenuated by a variety of clinically active antidepressants. Antidepressants increase the amount of struggle and the latency until the first extended immobility. This assay is considered to be a good predictor for antidepressant activity and identifies nearly all antidepressant classes including tricyclics, SSRIs, 5-HT1A receptor agonists, and MAOIs. 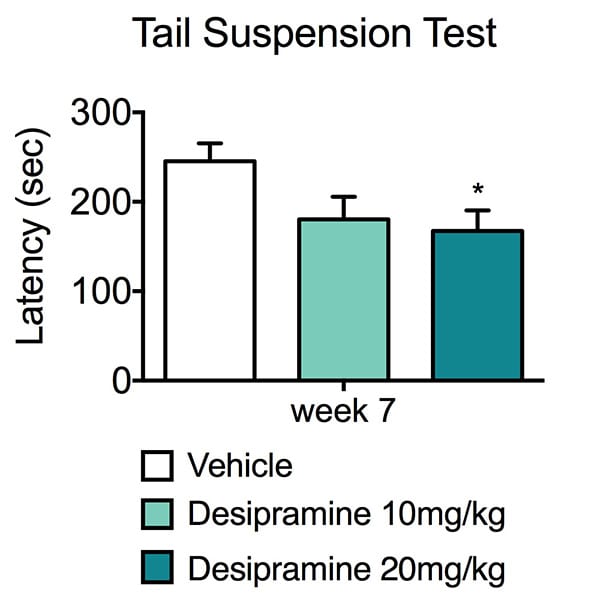 The Tail Suspension Test is typically run in an acute mode (study completed in one day) by evaluating test articles after a single administration. Ideal group sizes for most studies is about 12 animals. It is typically performed using mice. Since it is non-invasive it can be easily incorporated several times over the course of a chronic study.

If you are interested in learning more about the Tail Suspension Test, please contact us to start the conversation today!