Though the mechanism of migraine is complex and unresolved, one hypothesis states repeated activation of the trigeminal vascular system leads to long-term physiological changes.  Clinical symptoms include trigeminal allodynia and sensitivity to nitrates, both resulting in pain. A rat model of this pathology has been described by Oshinsky et al (2012). Melior has established and validated the Oshinsky model as a clinically translatable migraine animal model. 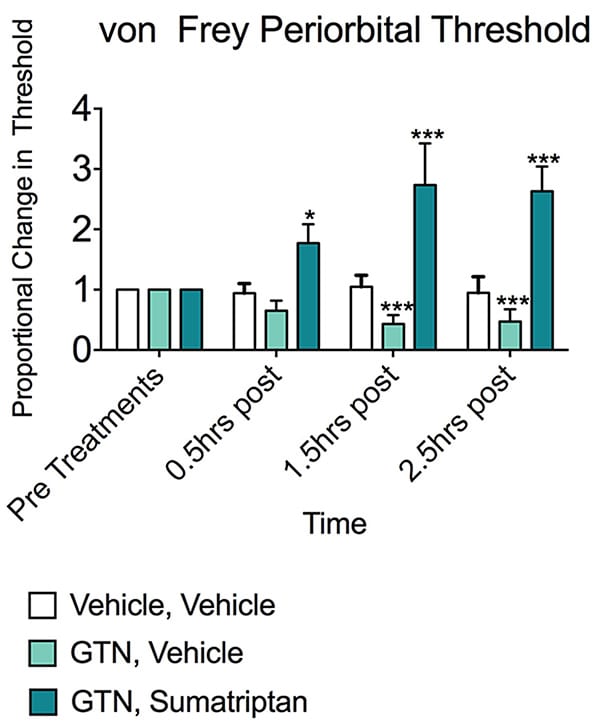 The periorbital thresholds of rats dosed with GTN, Vehicle were significantly reduced compared to baseline thresholds at the 1.5 and 2.5 hour marks, confirming GTN sensitivity. Periorbital thresholds were significantly increased in animals dosed with GTN and sumatriptan, demonstrating that sensitivity to GTN was successfully blocked by administration of sumatriptan. No significant change was recorded in animals given vehicle.
Data are mean ± SEM; *p<0.05, ***p<0.001 compared to same group baseline. (N=9).

The prostaglandin-induced migraine animal model generally takes at least 6 weeks to complete when factoring in baseline measurements that are performed prior to surgery. Once migraine has been established animals can be used for an additional 4-5 weeks. Therefore, it is possible to test multiple compounds, with a “washout” between compounds, using a given cohort of animals.