The tail immersion assay is a thermal test for evaluating the analgesic potential of compounds.

A number of clinically approved pharmacological agents have been demonstrated to delay the onset of heat sensitivity upon tail exposure to heat including opioids such as morphine, and alpha adrenergic compounds.

The tail immersion test has been reputed to measure spinally driven aspects of pain and has the advantage of measurements not being affected by sedation as they would be in other assays such as the hot plate test.

The study summarized below evaluated the time course of the analgesic effects of morphine and oxycodone against vehicle. 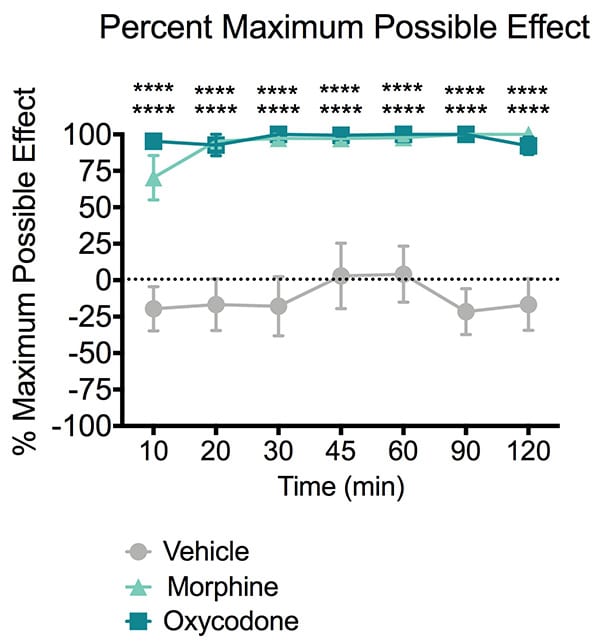 Tail Immersion Assay. The distal half of each mice tail was placed in a water bath. The tail withdraw latency was recorded with a 10 second time-out. An increased sensitivity to thermal stimuli was displayed in mice that received vehicle treatment, shown by a shorter latency to pain response.

Mice were tested twice for baseline response at 30 minutes prior to drug administration. After baseline, mice were administered vehicle, morphine or oxycodone and tested at 10, 20, 30, 45, 60, 90 and 120 minutes after drug administration. A maximum score was assigned (100%) to animals not responding within 10 seconds to avoid tissue damage.

The mouse tail immersion model shows a good response in measuring pain reactions to thermal stimuli. Using various time points up to two hours post-dose, mice in the vehicle group displayed an increased sensitivity throughout the duration of the study. The Morphine and Oxycodone groups both exhibited a significant decrease in sensitivity to thermal stimuli, with the majority of the mice in both groups reaching the maximum latency for tail withdraw

Can this test be performed in conjunction with other pain tests?

Absolutely! Tail immersion test is a great way to measure pain reactions to thermal stimuli. Determining if there is a response to mechanical stimuli using Von Frey could also give valuable information on a compound’s analgesic effects.

What reference compound is often used in this type of model?

Any opioid can be used in this model. We commonly use morphine and oxycodone. We can use almost any analgesic as a reference compound if requested.

Can we test the animals more than once over time?

Absolutely! We often suggest testing at a couple different timepoints to determine the duration of analgesic affects.

If you are interested in learning more about the Tail Immersion test, please contact us to start the conversation today!