Hyperalgesia is a condition of enhanced sensitivity to painful stimuli. The thermal analgesia hot plate test is a pharmacological test for evaluating the analgesic potential of test compounds.

A number of clinically approved pharmacological agents have been demonstrated to delay the onset of heat sensitivity upon paw exposure to heat including opioids and GABA potentiators.  Typically, the hot plate test is included in a battery of assays in evaluating the analgesic potential of test compounds.

In the study summarized below, the Hot Plate thermal analgesia test is reported with the formalin chemical nociception assay and the von Frey touch sensitivity test. 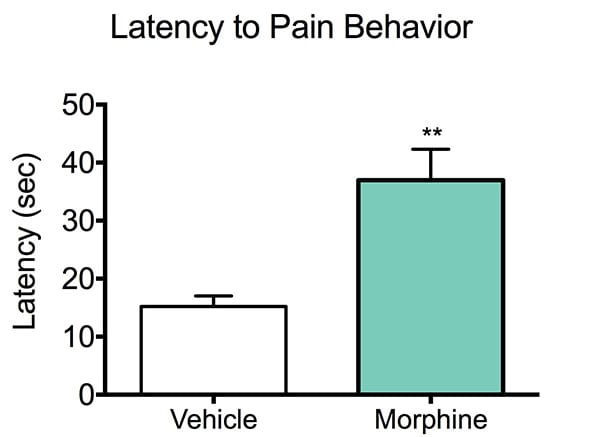 Latency to pain behavior. 30 minutes after treatment with either vehicle or morphine, mice were placed on a 52°C hot plate apparatus to measure the latency of first hind paw pain response. This response was elicited by a paw lick, shake or escape jump. Mice treated with morphine had significantly increased latencies to respond to thermal stimulation compared to mice treated with vehicle.

The Hot Plate test is typically run in an acute mode (study completed in one day) by evaluating test articles after a single administration. The variability is relatively low and statistical significance may be achieved with group sizes of about 8 to 10 animals. It can be performed in both mice and rats. Since it is non-invasive it can be easily incorporated several times over the course of a chronic study.

Can this test be performed in conjunction with other pain tests?

Absolutely! Hot plate test is a great way to measure pain reactions to thermal stimuli. Determining if there is a response to mechanical stimuli using Von Frey could also give valuable information on a compound’s analgesic effects.

When is this test utilized?

This test is often used in larger studies, such as a diabetic neuropathy or chemotherapy induced neuropathy study. Alternatively, it can be used in an inducible pain model, such as a capsaicin hyperalgesia model.

If you are interested in learning more about the Hot Plate tes, please contact us to start the conversation today!